I had this great blog post all figured out in my head – really! It was going to be so cool. It’s all about how our two local colleges can help be better partners in our city and comparing how Antioch College is handing their real estate issues in OH and….

On my walk home from work, I stumble into this:

It’s a surprisingly warm Wednesday in January; I just taught a long day of classes, and I turn on West Side getting ready to turn off onto my block, and there’s a half dozen police cars pulling up with lights and sirens blazing. My picture sucks; I’m clear on that. There were a ton of people on the sidewalks being screamed at by the cops to clear the area, including some guys still in smocks from getting their hair cut at the nearby barber shop. Everyone was wrangling for a view; of what, it wasn’t really clear.

But to give you some background: we have a liquor store on this stretch of West Side, that a bunch of guys hang out at. It’s usually about 6-12 guys (sometimes more sometimes less), and they can get pretty unruly. “Pretty unruly” is a euphemism for “I’ve seen one of the guys try and choke out his girlfriend until I got in his face and screamed til he stopped” and “they yell obscenities at young women with children going grocery shopping during the middle of the day.” It’s a bad situation.

This area has had three councilmen in the last year (yes), and I have spoken to all of them about the problem. I also went to a Police Captain’s meeting and I’ve complained to the cops many times, as have countless neighbors and other community members. Nothing changes. Shopkeepers on the street will go out and ask the guys to move on, and the guys will scream racial epithets at them.

Now, as far as I’m concerned, no one wants to see the guys arrested, hurt, punished, or anything like that. If they need help – please! By all means, let them get help. Alcoholism is terrible, if they are in fact alcoholic. I don’t know! I just know that I’d like to be able to walk home without being harassed, and that the situation is rapidly escalating. I want it resolved as quickly but also humanely as possible.

Tonight, something happened. I don’t know for a fact that it was related to the guys in front of the liquor store, but I do know that right at the corner where they all hang out there were a ton of cops and a guy being led away in handcuffs while resisting all the way. I can’t help but think what we’ve all been complaining about for over a year has finally boiled over. How many times do you have to speak up and be ignored? At what point does it become serious enough to be addressed?

McGinley Square Pub is where CivicParent and I go to talk about data and Jersey City. No really. By way of proof, I submit this random picture of a laptop with property tax data on it, with CP’s finger pointing to something: 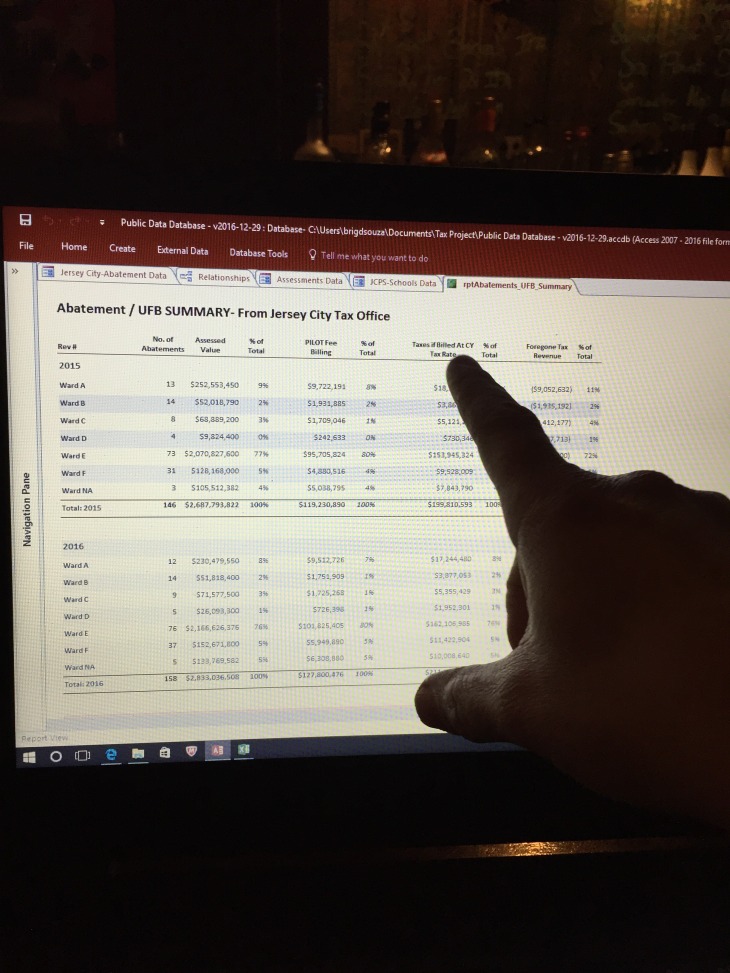 Right? It’s not a terrible use of a Thursday evening by any means. Sometimes we wind up taking the data and making maps and charts out of it like this. We also drink.

But anyway, on this particular evening, the most amazing thing happened, which is basically that lots of people started showing up with dogs. So many dogs! Ok, there were like three of them. But it was still pretty terrific. It made me think of Yappy Hour in Asbury Park, only with like three dogs and we were all inside and mostly the dogs were ignoring each other. But I still got to pet them so it’s cool.

Here’s a pic of me drunkface with a completely terrified little dog: 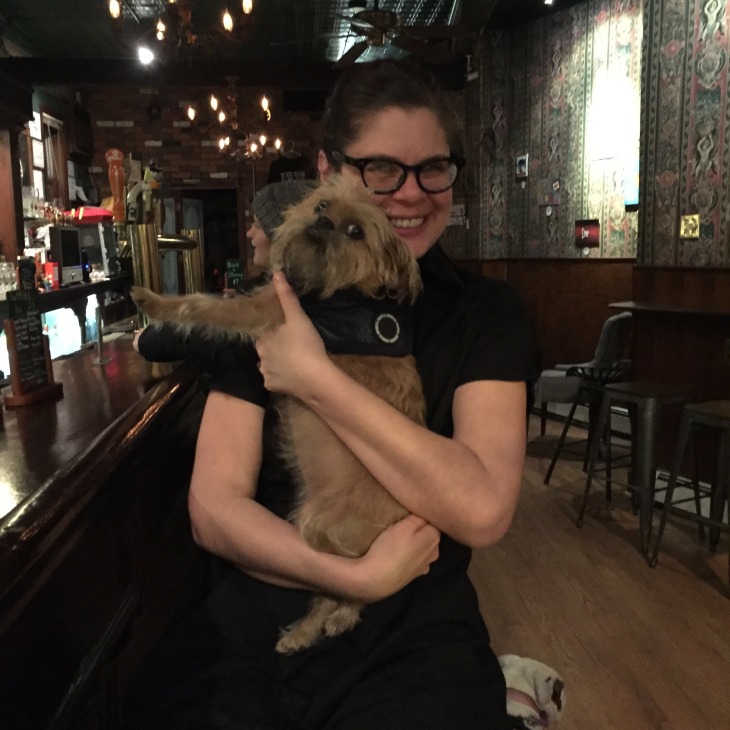 I'm an artist, and I live on Jersey City's West Side.